Geoffrey Clement Cowles [also known as Clement Cowles] was born in Lambourne, Berkshire England in 1894 and was active as a painter and commercial artist in the UK from c.1915 to the early 1970s.

In c.1930 he designed a poster for BP Ethyl entitled 'Stop Knocking Use BP Ethyl'.
A drawing by him for a press advertisement for J. & E. Atkinson Ltd., produced by J. Walter Thompson, is illustrated in 'Modern Publicity' 1932 (p.55).
Between 1916 and 1979 Cowles exhibited at Chenil Gallery, International Society of Sculptors, Painters and Gravers, the New English Art Club, and the Royal Academy in London.
Geoffrey Clement Cowles painted several landscapes of St Clement's, Jersey, Channel Islands.
He died in 1981.
We are grateful to Chris Mees for assistance 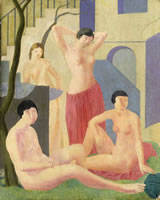