1890-1954 Poster designer who also did some textile and theatrical work, painted and illustrated books and magazines. Born in at , , Kauffer grew up in , where was assistant scene painter in the opera house. His early training as a painter was in and at the Art Institute of Chicago, where he saw the controversial Armory Show of modern European art. A patron assisted him to study in continental Europe where in he was influenced by Van Gogh's work. Resolved to support himself by poster design, at the outbreak of World War I he had to flee to where he associated with painters such as Harold Gilman and Charles Ginner and gained commissions for the Underground Electric Railways Com­pany. For the next quarter-century he was the main designer of posters for London Underground under Frank Pick's patronage. Did work for Roger Fry's Omega Work­shops, helped to found Group X with Wyndham Lewis and early in the 1920s returned for a while to , where he designed for the Theatre Guild. Showed at Goupil Gallery, Arthur Tooth and Son and NEAC. Illustrated for periodicals such as Radio Times and Fanfare and books such as Arnold Bennett's Elsie and the Child, 1929, 'I' S Eliot's Triumphal March, 1931, and Edgar Allan Poe's Complete Poems and Stories, 1946. However, his reputa­tion rests mainly on his outstanding contribution to modern British poster design, inspired by Cubism and Vorticism, working for such clients as Shell-Mex and BP, the General Post Office and Imperial Airways. His Soaring to Success - the Early Bird poster, used by the Daily Herald, epitomised Kauffer's aspirations as a designer. After the outbreak of World War 11 Kauffer, who married the designer Marian Dorn, returned to . & travelling exhibition in 1973. 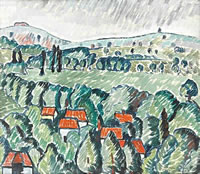