Dean Cornwell, an American illustrator,  worked as an assistant to Frank Brangwyn between 1926 and 1930, helping with the Skinner Murals (second series) and the British Empire panels. He was a close friend and travelling companion of Helck who advised Cornwell to study with Brangwyn in preparation for his mural project the rotunda of the Los Angeles Public Library (1927-32).  For over three decades, Dean Cornwell was recognized as the "Dean of Illustrators", and was a celebrated and well-known name during his lifetime. He was widely regarded as an instructor and idolized by a generation of illustrators, lecturing at the Art Students League and at art museums and societies throughout the United States during the “Golden Age of Illustration”. His paintings were exhibited at the Whitney Museum of American Art, the Pennsylvania Academy of Fine Art, the Chicago Art Institute, the Pratt Institute, the Art Center of New York City, and the National Academy of Design. Between 1914 and the late 1950's he produced over 1000 illustrations for poems, stories, and novels. Between 1920 and the mid-1950's, his illustrations appeared in magazines and posters as advertising for hundreds of products, such as Palmolive Soap, Coca-Cola, Goodyear tired, and Seagrams Whiskey. In addition to his career as an illustrator, between 1930 and 1960, Cornwell was one of America's most popular muralists. His historic murals decorate over 20 public buildings across the United States. Cornwell was an illustrator who tried to find a meaningful role in a world constantly changing with technology. His greatest inspirations were Howard Pyle, N.C. Wyeth, Edwin A. Abbey, and Harvey Dunn. Despite Cornwell's prolific and well-regarded work, today he is much less well known than during his lifetime. 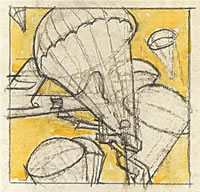