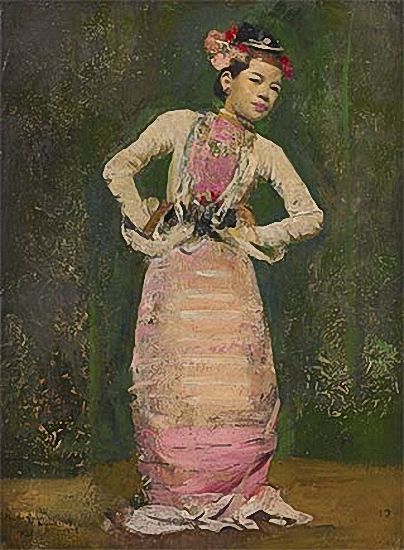 
Signed and dated and inscribed on the reverse 'Mandalay 1919'; further inscribed by John Napper, 'Given to JN by GK'

Provenance: given by Kelly to his assistant, the artist John Napper

Kelly's portraits of oriental dancers were at one time amongst the most popular of all popular prints. He first painted them early in his career, when he spent a period from 1908-9 in Mandalay, Burma, apparently to recover from an unhappy love affair. He returned to Burma and Cambodia later in his career to undertake further studies of oriental dancers.
He painted several poses of Ma Si Gyaw, this being Pose II, the Tate Gallery holding Pose IV (accession number NO3001).