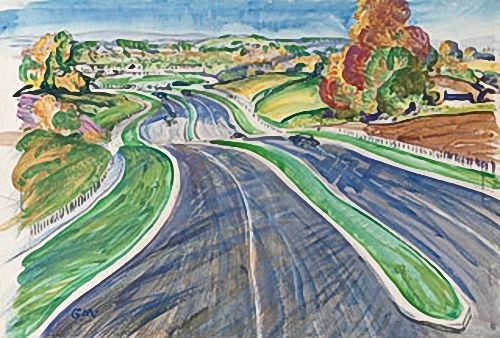 Western Avenue, now the A40 (the road to Oxford and the Midlands), was one of the arterial roads pushing out of London in the 1930s expansion. This view is likely to be of West Middlesex towards the Bucks borders, probably around Denham, where the hills begin, having just left behind Northolt Aerodrome, the new factories and housing estates of Betjeman's Metroland. Moira's image is very redolent of the period. His 1934 Academy exhibit entitled Head lights and that of 1939 entitled What of the Future demonstrate his affinity with contemporary subject matter.

We are grateful to Michael Barker for his assistance.